ALL WIFE BEATERS SHOULD BE JAILED - ASU EKIYE 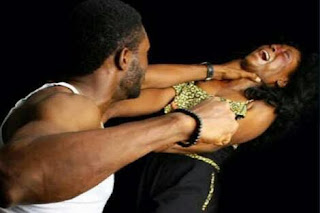 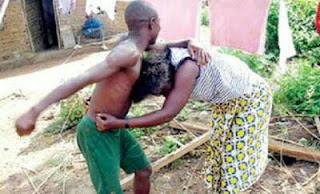 The Nigerian government has taken legal proceeding to prosecute men or abuse their women in several states. There is currently a push in Nigeria for federal laws concerning domestic violence and for a stronger national response and support for domestic violence issues.

I have  been inundated severally with cries of friends, sisters or neighbors who are direct victims of this animalistic cravings of some men who think that their wives are the first major showcase of their Masculine energy. It is incredible to exhibit your chauvinistic prowess by "vandalizing" your wife or spouse.
The African man is so full of ego. As backward as the black race is in the committee of nations, the unthinkable is that it is only in the black nations that strict laws are not legislated and thereby enforced to protect the women folk.
There was a very touching incident that happened in sapele Delta state . Why it was so painful was that it involved a clergyman A pastor of a very popular church in Nigeria was involved . This is not a third hand story. I was a 2nd hand witness. This "animal"who became a ravenous tiger found in his wife an object for the display of his execrable and detestable passion of wife beating . When the news filtered in that he beat his wife until she died, he found an alibi in informing the police that it was an armed robbery situation. After much of police investigation,  It took the last son of the man to confess to the police that "it was daddy that beat mummy". But the most annoying thing in that episode is that the pastor is working free, recently remarried and is pastoring a branch of that church in the North. Because the church was powerful enough to lobby their way through the judicial process to free him.
That is abominable . I don't care who is involved . Those who kill deliberately should be given commensurate punishment .
Now, why kill a woman that u have issues with especially when she is called your wife-Animal instinct.
I have had situations where I went to rescue my niece from the jackboot of an abusive husband. Infact that particular incidence was a case of wrestling an antelope from the jaws of a lion.
Today she is living well somewhere in the country free from abuse.
I think our legislative concoction should have in its mix laws that jail wife beaters and killers. That is where I stand . Civilization is not a function of the technological gadgets that you wield and brandish here and there. Civilization connotes a developed mindset living above primordial instinct and carnivorous cravings .

A WORD FOR THE SISTERS:

Why endure an abusive relationship to the point of death ? If you notice certain rapacious and ravenous idiocyncracies, alert your people. If you observe traces of domestic tyrany and authoritarianism, cry out. What foolishness permits a woman to hide such abuses under the guise of protecting the marriage pact and secrecy and ultimately die in d process . I have sent a strong word  to all men married to my sisters! If I hear am? Una go see the Militant in me. At least I have been married for 18 years now and I have not laid my hand on my wife even once. That's somebody 's daughter, sister or niece. Why will I allow some man some where to pound  my sisters even to the point of death? Women beware!!!!!
This is my opinion . My name is Asu Ekiye,
The Prince of the Niger Delta
at 05:41:00