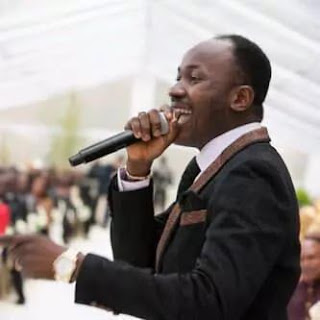 News reaching us indicate that a very fiery prophet in Nigeria Apostle Johnson Suleiman whose numerous prophetic utterances have mostly been fulfilled, Has come out boldly to challenge the proposed anti Christian bill in Kaduna state.

At the closing of his monthly Ministers Conference tagged Ministers without blemish. held in Auchi Edo state  on Thursday the 10th of March 2016, The General overseer of Omega Fire Ministry made a Fiery declaration: that any Governor who enacts any law to impede the gospel or restrict Christians in Nigeria will die. And his prayer was visited with a thunderous response of AMEN by a cross section of the participants who were mostly ministers present at the event.
This declaration of death sentence is the first most authoritative confrontation of the draconian impregnations of a malevolent Governor, whose main agenda is to decimate Christianity starting from Kaduna state . Such a response is reminiscent of the days of Arch Bishop Benson Idahosa whose towering influence in matters like this is greatly missed by Nigerian Christians. These are indeed not the best of times for Christians in Nigeria.
at 19:09:00