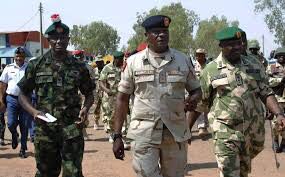 Reports reaching us have it that the Nigerian army has lost one of its top chief to fatal road accident. According to the army spokesperson, Colonel Kukasheka Usman, who made this disclosure via a Facebook post on Tuesday, March 8, 2016, the Chief of Training and Operations Major General Yusha’u Mahmood Abubakar and the acting General Officer commanding 3 Division of the army, Brigadier General MSA Aliyu, were both involved in the accident.
However, only the training chief was reported to have lost his life in the ugly incident which may cause a setback for the troops in its war against insurgency in the country. He wrote: “The Nigerian Army wishes to inform the public of the involvement of its Chief of Training and Operations (Army), Major General Yusha’u Mahmood Abubakar and the Acting General Officer Commanding 3 Division Nigerian Army, Brigadier General MSA Aliyu in a road traffic accident along Maiduguri-Damaturu road today. “Sadly, we lost Major General Yusha’u Abubakar as a result of the incident, while Brigadier General Aliyu sustained some injuries and is receiving treatment. Details will follow later.” This news is coming barely 48 hours after Nigeria lost its minister of state for Labour and Employment, James Ocholi, his wife son and their driver to a deadly road accident on Kaduna-Abuja Expressway. 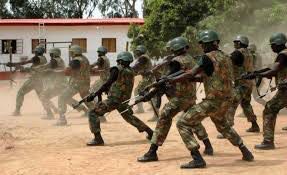