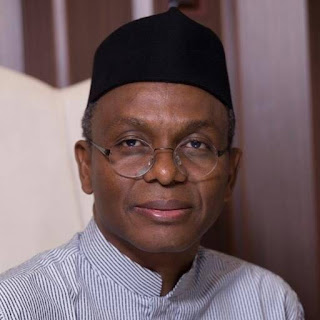 KADUNA
The proposed bill by the governor of Kaduna state Mallam elrufai did not come to discerning Nigerians as a surprise. Recall that prior to the election some descerning Nigerians who have studied the intent of this change mantra  called on Nigerians to be wary of these intents. But they branded these persons "religious foul criers"

While we were about to recover from the shock of the big players in the power game to decimate every vestige of Christianity at Aso Villa by tempering with the church structure, the bomb of these bill emanating from the Governor of Kaduna dropped as d Breaking news. This is just d very least of the grand design to silence the course of Christianity in this land.
It must be stated unequivocally that this bill is intended to checkmate Christianity in the north and has nothing to do to instill sanity to a society that is already in the throes of confusion.
The bill as presented by the Governor is as laid out below

* In Kaduna you cannot preach without license
* Every preacher will have to go and get ONLY one year license (renewable every year). That is, you must always preach without an expired license or you risk 2 years imprisonment.
* If you invite any external preacher (i.e. preacher outside kaduna state), such a person must be licensed for the duration of his/her stay and the body issuing the license has the right to reject external preacher they feel is not qualify to preach in Kaduna state.
* Every preacher who want to be licensed will appear before a screening committee. If he/she scales through, he/she will only be given licensed for one year.
* The law criminalizes the use of CDS, Flash Drive and other communication gadgets except in religious building or inside your house.
* That means, you will be arrested for listening to preaching or religious music inside your cars or in any open place except in your house or religious building.
* If you preach without license, you are guilty of offense punishable with 2 years imprisonment or a fine of 200,000.
You can’t use microphone in your church after 8pm you are guilty of offense punishable with 2 years’ imprisonment or a fine of 200,000.
* Since all preaching must be done within a building, it means public evangelism will be criminalized. Those who preach early morning, known by some as morning cry and preaching inside bus if arrested will be fined N200,000.
* This could also means, people will not be allowed to go out for evangelism on streets or move with vehicles with address systems to advertise their programs.

When change was the call cry, it was actually a change for selfishness and egocentric desire.
at 21:00:00