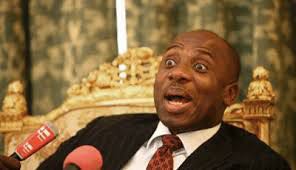 As part of his media tour, The minister of transportation Rotimi Amaechi has been seen in most media houses, all week.
Keen watchers of political activities in Rivers state are of the view that the media tour was deliberately scheduled to coincide with campaign activities geared towards the upcoming rerun elections in Rivers state.
It was also observed that in most of the interview session, some highly acerbic and despicable languages were employed to desecrate the person of Bar Nyesom Wike the current Governor of Rivers state. On AIT earlier in the week, he branded the Governor incapable of speaking simple English .
However, what happened today in Love Fm took a dramatic turn.
Mr Rotimi Amaechi in the said interview called on the Governor of Rivers state Bar Nyesom Wike to Resign for his inability to restore security in the state .


Amaechi: I think Wike should resign because he has failed Rivers state. The insecurity in the state is alarming.

Amaechi: if you don't have any other question to ask me, I get out of here. What kind of stupid question is that?  Who told you that the security situation has gone worse in Nigeria? I am here to discuss Rivers state .

Interviewer : Hon minister, it is a simple question, you just called for the resignation of Gov Wike,

Amaechi: (cuts in) please just shut up......
And the hon minister ended that interview abruptly and walked out.
The rest was apologies to the listeners from the interviewer.

MY OPINION
I think the time has come for us to put an end to this primitive politics that we practice in Africa. It is either , we marshal out a form of leadership that is peculiar to the people of Africa or we practice democracy in its profound ethos.
The ideology that opposition must be crushed at all cost is in itself also animalistic . Now look at all those who claim to be beacons of democracy, they cannot brook any divergent views. That's why even before the emergence of this political dispensation , candidates could not muster even the slightest of courage to engage the opponents in a robust debate. Nigerians could not enjoy the benefits of clear manifestos expressed to the people . It was just politics of brickbats and tirades . Politics of innuendoes and sarcasm. No wonder political promises can even be denied with ease.
I want to enjoin the PDP and the APC to practice the rule of the game or we jettison this entire shenanigan we call democracy.
I am not a politician and I do not belong to any party. This is just my candid empirical conclusion.
at 21:46:00