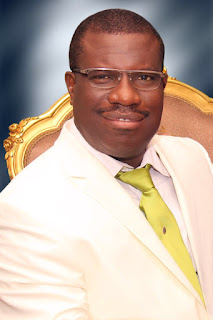 1. His credible  background as a foremost minister of the gospel in Nigeria
2. His love and passion for the promotion of talents  in the country.
3. HIS understanding of the music ministry  and how best it can be promoted and developed.
4. His ability to connect to every generation of Nigerians both the old and the young.
5. His unquenchable zeal in the support of Fogmmon and being the only Pastor in the World who has volunteered his personal Money in backing a take off of a branch of Fogmmon .
6. His pivotal position  as the pioneer pastor of the National  President of FOGMMON Mr Asu ekiye and IN whose church Asu Ekiye started his musical career.  He was known to have featured Asu Ekiye , the National  President  to sing on a Television programe for the first time in 1993.
7. His pedigree as the Only Pastor who has spoken about Fogmmon in more public occasions than any other.
8. His radical desire to see fogmmon grow.

9. He became the first person to occupy  the dual positions of PFN chairman  and CAN chairman in The history of Rivers state

10. He remains the international  President of INTERACT. A mentorship umbrella for numerous ministers of the gospel who seek tutelage under him.

Apostle Prince-David Zilly Aggrey is the Founder and Senior Pastor of Royal House of Grace International Church, a ministry with Prophetic mandate to nations and generations.

He is a conference speaker, author and host of The Prophetic Watch, a widely viewed Television Program as well as Mid-Week With Jesus radio program in Nigeria. He is the current chairman of the Pentecostal Fellowship of Nigeria (PFN) Rivers-state chapter.

He is happily married to Pastor Mrs. Gladys Aggrey and they are blessed with six Children.
at 05:57:00