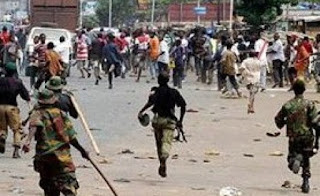 As a keen watcher of events in this country, I am at loss the pervading silence of the various agencies that bark when there is Injustice, the silence of the media that cries foul, when there is  a contravention of norm, the silence of Christian pressure groups that scream blue murder when Christianity is endangered. How come we are so silent  in the face of the very deliberate onslaught and the calculated agenda to extirpate Christianity and gradually extinguish non Moslems in this country.
The recent unprovoked attacks perpetrated in various sections of this country by Fulani herdsmen and most recently in southern Kaduna,  an area predominantly inhabited by Christians is all but a part of a malevolent plot to perpetrate a reign of ethnic, religious and ideological cleansing in this land. For those of you who are averse to this kind of critique, I hold no apologies. What I say here is my personal opinion. I do not hold fort for any person, group of persons or organization .

There is an impending danger looming in this country. If we don't rise up to this cycle of  connivance and a highly unabashed provocation we will wake up one morning to realize that what stares us in the face is a monster of an intractable proportion.
Somebody please tell me; why are the Authorities paying lip service to this  unprecedented carnage ? We now have a bigger problem than Bokoharam in our hands. Bokoharam has changed uniform now. For those southerners who ranted and raved that these were all distant isolated occurrences, the enemy is just by your corridors masquerading in different gabardine
The spate of killing by herdsmen in the country right now as assumed an audacious dimension. Southern Kaduna will be the lowest benchmark from henceforth . It is sickening the veiled support these people derive from the authority.

But come to think of it, Why does this government often hastily set up investigative panels on various crisis in the country including the last Rivers state runoff elections and look away when these carnibals called herdsmen have migrated from Sambisa to the villages and towns of Nigeria to become the foot soldiers of this well thought out Annihilation agenda.
The cable report just published that
Herdsmen have killed more Nigerians than Boko Haram has done in 2016. 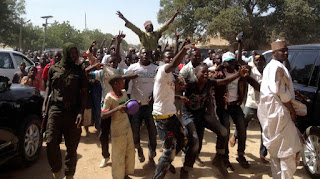 According to very conservative figures compiled by TheCable in 2015, Boko Haram killed over 4,000 Nigerians within the calendar year, down from 6,347 in 2014.
From 2009 to 2015, the insurgents put a halt to more than 30,000 lives – innocent civilians full of dreams of their own, dreams that could have been useful to the country’s match to development.
However, the current trend shows herdsmen may outrun Boko Haram for the cruellest killer group in Nigeria for the year 2016.
So far in 2016, very conservative figures have shown that the herdsmen  have killed at least 440 people in Nigeria, while Boko Haram has killed 202 within the Nigerian borders.
The ongoing conflict between farmers and herdsmen across the North-Central is costing Nigeria at least $14 billion in potential revenues annually, a new report by a global humanitarian organisation, Mercy Corps, has found.
This madness by herdsmen was initially a set of isolated occurrences restricted to just some sections of the country. But noticing the body language of implied support from key players in government and the palpable lack of response from relevant agencies and associations of right group, the spate of killing has now spread to every part of the country.  Name them .
Ohali-Elu town in Ogba-Egbema-Ndoni Local Government area of Rivers state. March 2016
In August 2016, Four months after herdsmen invaded Nimbo village in Enugu State,  killing and maiming the villagers, another village in the same state was, attacked  by, at least, 50 herdsmen leaving death and tears in their wake.  The invaded village was Ndiagu,Attakwu, Akegbe-Ugwu in Nkanu-West Local Government Area of the state. Some of the victims include 26-year-old Seminarian, Lazarus Nwafor, on a year apostolic work, who was slaughtered and a six month pregnant woman whose stomach was ripped opened .
Attacks by Fulani herdsmen in the North-central Nigerian state of Benue has led to the killing of at least escalated 1, 269 persons, investigations have shown.
Out of the 23 local government areas in the state, the rampaging herdsmen have invaded and occupied 14 and may invade the remaining nine unless urgent measures are taken to curb the menace, authorities said.
Findings confirmed by residents, security officials and the state governor, also showed that in the North-east Senatorial District of the state, the herdsmen have invaded Katsina-Ala, Kwande, Logo, Ukum; leaving out Vandeikya, Konshisha and Ushongo.
In Benue North-east Senatorial District, the killer herdsmen have attacked all the other local government councils except Gboko.
The council areas invaded and occupied by the killer herdsmen include Guma, Gwer-West, Gwer-East, Buruku, Tarka and Makurdi local government councils.
The invasion of Ogbadibo, Agatu and Apa local government areas in Benue South Senatorial District are however believed to be the most brutal.
On February 29, for instance, the herdsmen invaded several Agatu villages and farm settlements in broad daylight, gunning down children, women, men and the elderly.
At the time the gunshots subsided, over 500 villagers were reportedly massacred and over 7000 were displaced in 10 villages including Aila, Okokolo, Akwu, Adagbo, Odugbehon etc

It's difficult to mention all the gruesome cases in Ekitti, Anambra, Delta, and other parts of the country. This onslaught has become a plague of sorts. The spread of this attack has become epidemic and until we all rise up to this key agenda of the Fulani Lords, we may never live to tell the story.
On Easter this year , a Christian woman was beheaded in KANO  and recently the culprits were set free. Yet there is a graveyard silence. Before that, a pastor of a popular Pentecostal church was murdered in cold blood in Abuja, and that case has also died. Are we under any kind of Spell?

MY SUBMISSION
Why is the Church of Nigeria so silent? Who is the chief spokesman of the church. Who is the leader of the body of christ? Where is CAN in all these? Why haven't we had an authoritative statement from the leadership of the body. Whose words should we respect now in this crisis moment . I thought we had big churches and prosperous Christian leaders whose members are daily slaughtered like chicken? Why is there so much silence in the face of this unabashed impudence?
That's why I have often said that Arch Bishop Benson Idahosa has not been replaced. This man Died since 1998 and almost 18 years on we have remained in fragmented and segregated quagmire and so regrettably no man has stepped into his shoes.  He it was who championed causes that affected the body of christ as his personal problem. Now it is "to your tent oh Isreal. Now it is about "my church" and my people. There is no more "our" in the Christian lexicon any longer.
But why is there so much fear to speak out. What generation has been so scared to address a monster that has hit the body of christ. It is shameful if not regrettable that we have not been able to summon enough courage through the unity of purpose to address our challenges. Then what are we building?  Are we after the KINGDOM or after our bellies and possessions? Most of the people speaking out today do not qualify to speak for the body of christ. They do not have the pedigree and the follower-ship.  95 % of Those who have the follower-ship have been silenced because they have compromised their conscience. This should not be the case.

PLEASE WATCH OUT FOR MY NEXT PIECE ON THE TERROR OF COLLAPSED CHURCH
BUILDINGS IN NIGERIA
at 04:51:00