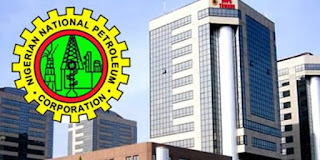 Another fuel crisis is looming across the country as workers of the Nigerian National Petroleum Corporation, NNPC, yesterday, shut down the activities of the corporation nationwide over the ‎unbundling exercise.
NNPC The workers, under the aegis of the Petroleum and Natural Gas Senior Staff Association of Nigeria (PENGASSAN) and the National Union of Petroleum and Natural Gas Workers (NUPENG), said they were not consulted before decisions of the unbundling exercise were taken‎, hence, it is unacceptable to them. Some of the workers who spoke on the condition of anonymity, chided the Federal Government, the Minister of State for Petroleum Resources, Mr. Ibe Kachikwu and the management of the NNPC for taking such decision which concerns and affect the future of the workers without due consultations. In Abuja, the workers were seen standing around th‎e headquarters of the NNPC, holding discussions in small groups.
at 12:51:00