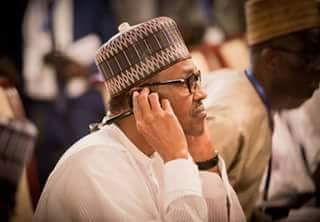 For the record, Buhari is not coming to London for ear infection treatment but for a secret negotiation meeting with the Niger Delta Avengers

An insider who is privy to the behind the scene arrangement on how to stop the further threat of the Avengers to oil installations in the region says Buhari will be in London to meet with Jonathan and the representatives of the British government finding truce to the impasse.

It would be recalled that Jonathan was briefly in Nigeria 4 days ago and met with the President in his office before jetting out again, back to London. A day after that, Buhari met Obasanjo to seek his advice on the crisis in Niger Delta. The Duo, Obasanjo and Jonathan advised Buhari to meet with the agitators in a neutral place away from the media - prompting the London trip.
According to my source, the Intel at the government's disposal on the Niger Delta Avengers revealed their connection to two Arabian oil producing countries who are said to be angry with Buhari's government for treating the Shiites as nothing and the continuous detention without trial of its leader, Zakzakky.

Also, the weapons and technology at these guys disposal is not something a serious government should take lightly. There are speculation that they also have connection to the North Korean government.

Nigeria is currently bleeding seriously because of the activities of the Avengers, my source told me that some of the boys behind the Avenger will be arriving London tomorrow on the invitation of the British government to be part of the peace process.

Obasanjo and some other south south leaders are expected to join the meeting in London anytime from tomorrow as well. All of these will be away from the media. But you will see the pointer as the week unfolds!

President Buhari is not in London because of ear infection, he is there for something  more serious.
at 00:44:00