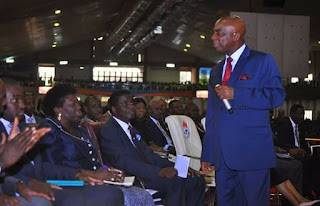 For many years now Satan has tried to stop the church in Nigeria but has failed.

Arabian proverb that says:
An Army of sheep led by a lion will defeat an Army of lions led by a sheep. What the Church in Nigeria has lacked for many years has been a strong authoritative voice. But things have changed!
The Executive Secretary of the perpetrators of this evil code was sacked last night and the code suspended. There has probably never been a time that such swift response and reversal was effected by government!
You cannot determine the CEO of a company where you are not a stakeholder! Priesthood is eternal; it has never had any government interference since God created the world .

The Church has now become unstoppable! It has also gone beyond threats. Only the Church can threaten the nation, not the other way around.
All the Mission Schools built by Nigerian Church Organizations in the last 20 years exceed those built by the Foreign Missionaries throughout the country’s history. Should the Church not be commended? Is it now a season to harass the Church?
I was before the LORD for 18 hours; no government official was there; the Mandate was delivered on a solo transaction between God and myself alone. I told the Pastors on Sunday: if you ever contemplate my retirement, you have first to show me the letter of appointment you issued to me!
I am a bona fide Nigerian citizen. There is no office in this nation that I am not qualified to occupy.
at 01:35:00